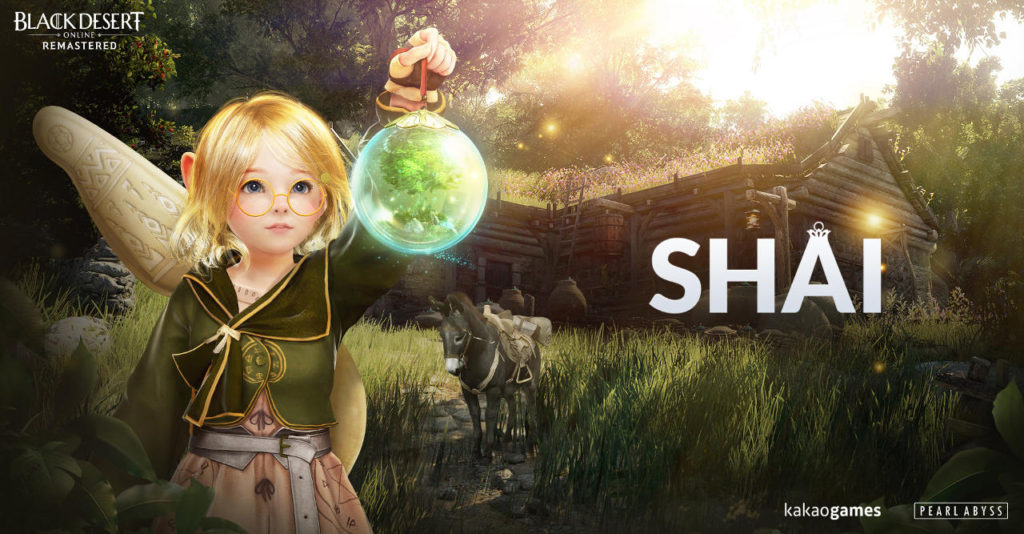 Amsterdam, The Netherlands – 8th of June – During this weekend’s ‘Heidel Ball’, an exclusive event for fans of Black Desert Online, various big announcements were made concerning the future of the popular MMORPG. Aside from revealing a new class, expansion and group PvE content, the producer also shared information about a new approach with regards on how the game will be updated in the future.

Perhaps the most exciting reveal was the 18th new character class. The ‘Shai’ is a mischievous halfling from the forest near Florin, which lies north-east of Calpheon. Using her Boomerang and a variety of skills focused on both evading danger and aiding her friends, the Shai is quite unique compared to other classes. This is further emphasized by the fact that the Shai is the only class to start at ‘professional’ levels in the Alchemy and Gathering life skills.

Dueto her small stature, the Shai prefers to ride smaller mounts such as the Donkey on her adventures.

Her unique class skills further offer new gameplay and tactical options. The Shai can fool enemy players by ‘Playing Dead’ but is also a very effective counter to other stealthy foes. Using her Lantern sub-weapon, a Shai can reveal hidden enemies around her, sneaking up on her should prove difficult. Another unique ability allows the Shai to create a protective barrier around her and her allies, making it an effective support class.

The preparation event for Shai begins today and pre-creation event will be available on June 19th until the official launch. Please check the event page for details on the pre-registration rewards.

A new expansion named ‘The Great Expedition’ will see the introduction of new wind and current mechanics to the ocean of Black Desert Online. Traversing the high seas will now become more rewarding to players that can skillfully utilize the winds and current to reach their destination more quickly.

The addition of new islands to the ocean and new ships will give players even more reasons to explore this new content. The new islands will have special trade mechanics and players can use one of the new trading-focused ships to transport goods between islands, making a nice profit in the process. The new islands are easily distinguishable by their unique themes, but finding the correct one will require navigations mastery within the new current and wind mechanics.

A new PvE experience: The Altar of Blood

For players that are more concerned with the content on land, a new PvE experience will be added in the form of the ‘Altar of Blood’. This content will see three players defending their ‘sacrament’ from increasingly strong groups of monsters. The ‘Altar of Blood’ demonstrates similarities with ‘Savage Rift’ but with the groups being smaller and players being able to utilize their class-skills. This new challenge will require solid tactics and cooperation to conquer the foes in the ‘Altar of Blood’. Thematically, ‘Altar of Blood’ is linked to the recently added ‘Star’s End’ update that was launched last week.

The producer of the game, Jae Hee Kim, also touched on more general improvements that are being planned for the game. The various grind spots in the Black Desert Online will receive a new balancing pass to make monsters more challenging. Furthermore, improvements to the Life Skills are currently in the works to make these systems more rewarding and engaging.

Improvements are also being made towards the user interface with the goal of reaching a more cohesive experience between the console and PC-versions of the game. These updates are currently scheduled to be released somewhere in summer.

There was also some news about earlier announced content. The O’dyllita region has been postponed to give the developers time to create a more unique spin on this expansion. The Territory War content is also nearing completion but it was the opinion of Pearl Abyss that further improvements should first be made to the existing Conquest and Node War content before it could be fully released.

Black Desert Online is an open world action MMORPG with cutting-edge visuals and skill-based combat that redefines the genre. Black Desert Online has the most fully developed character customization system of any game that is currently on the market. This feature allows users to break free of the mundane and make unique characters that are truly representative of each and every player. Its intuitive controls, beautifully designed worlds and extensive lore are enough to excite both new and veteran gamers of MMORPGs and RPGs in general. The game has been successfully launched in over 150 countries, is available in 12 languages and has over 10 million registered users. The mobile and console version is scheduled to launch globally in 2019.