Interactive Intergalactic: New Trailer Let You Choose how to Destroy All Humans! 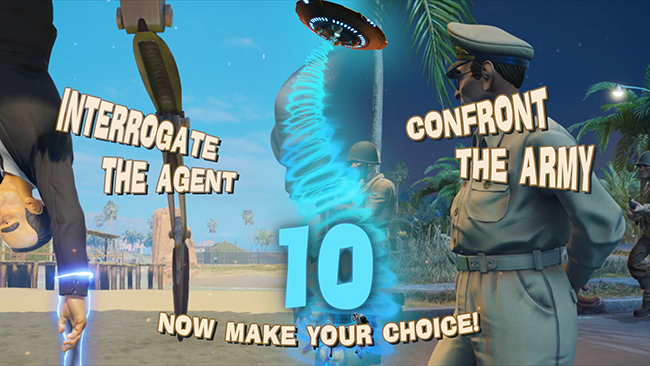 Vienna/Austria, Offenburg/Germany, June 30th, 2020: Mankind will fall. We all know that the Furon Empire will be victorious – resistance is futile. Was nice to meet you. But the question is still, what methods will Cryptosporidium-137 choose to Destroy All Humans!

In the new interactive trailer, the choice is actually yours – with generous permission from the benevolent Furon Empire.

We know, most of you humanoids can’t wait to witness the glory of the Furon Empire by themselves. So here is your chance, play the Destroy All Humans! Demo for PC today, you can download it via Steam or Gog.com:

The Crypto-137 Edition, featuring a Crypto-137 figurine, a Crypto backpack, keychain, six lithographs, anti-stress toy and all in-game Crypto skins, all contained within a premium box, is available for pre-order now and has an SRP of €399.99 | $399.99 | £349.99 | seven tons of mutilated cow corpse juice’s worth of Crypto currency.

The DNA Collector’s Edition, featuring a Crypto’N’Cow figurine, keychain, six lithographs, anti-stress toy, and all in-game Crypto skins, all contained within a premium box, is available for pre-order now and has an SRP of €149.99 | $149.99 | £139.99 | twelve charred human femurs’ worth of Crypto currency.

PrevBackDayZ Update 1.08 is Now Live On All Platforms With New Upgrades and Weapon
NextHandcrafted with loveNext
Back to Home Page