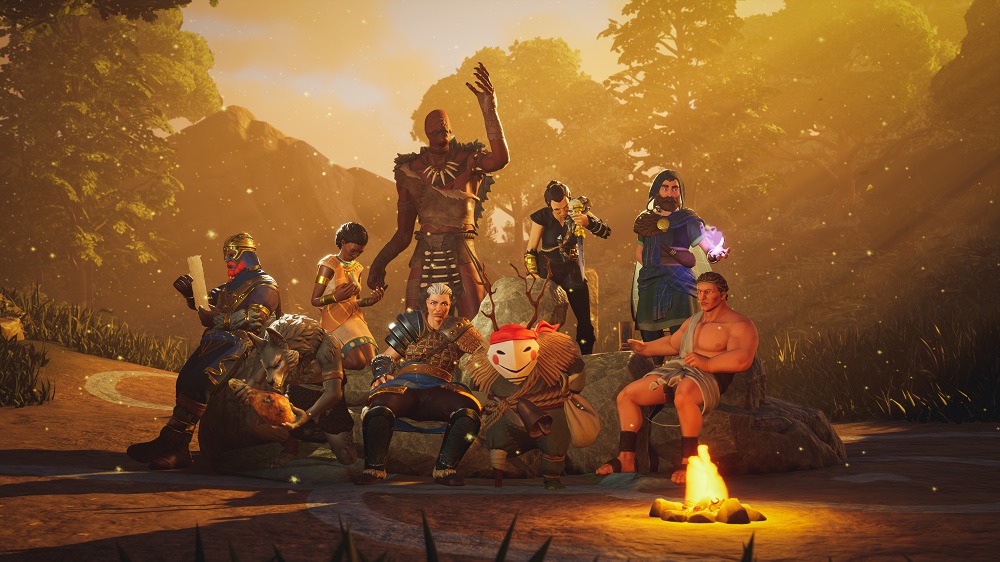 Nine unique party members to travel with, battle beside, and romance as The Waylanders comes to Steam Early Access this summer.

A Coruña, Spain – March 27, 2020 – Gato Salvaje has shared the full roster of companions for their upcoming time travelling fantasy RPG based on Celtic mythology. The Waylanders, headed for an early access launch this summer, was heavily inspired by RPG classics such as Dragon Age: Origins and Baldur’s Gate. As such, The Waylanders will have a full roster of companions to travel beside the player’s character as they step between Celtic and Medieval periods.

Amergin is Master Druid of the court of King Ith. Bright, inspired, excited about life, and gifted at magic, he is known through the court for his charm and sharp wit. Amergin believes with all his heart that the world is out of balance, and he has devoted himself to becoming part of the solution.

A distant relative of King Ith, Amergin’s magickal prowess was discovered at an early age. He was sent to the Mage’s College, where he was raised with little knowledge of the outside world. Though he excelled at his classes and was extremely well-liked, he developed a reputation for sometimes being close-minded when it came to opinions conflicting with the Celtic way of life.

Amergin is regarded as a magical and political authority by other humans, but due to his youth, immortals rarely take him seriously. They should though, Amergin is the most powerful druid to grace the Celts in generations, a fact that he is only just coming to realize.

Studious, serious, and sometimes overly blunt– Berath is a quiet immortal professor. Underneath his often cold & analytical exterior is a kind, gentle soul who is not afraid to rib others with a playfully snarky comment. Don’t be fooled by his passion for craft, cooking, and plants — with his knowledge of the bow, Berath is generally one of the most dangerous people in any room.

Unlike many Mourians, who have a zest for life and enjoy drama, Berath embraced his immortality by relishing small moments of light. He connects with those who are struggling by reminding them of the little things that are going well. Berath still finds wonder in the tiniest butterfly and mystery in the rainbow reflection of morning dew. Every moment is a meditation.

Berath has dealt with depression his entire life. While his overall demeanor is calm, a pervasive undercurrent of deep sadness he cannot shake. As an immortal who has been living with a mental illness for generations, he’s come to accept that’s just how things are going to be.

Delba is the youngest daughter of the Fomorian king. Only centuries old, she is one of the youngest Fomorians. Her mother disappeared on the surface when she was a child, and she’s been obsessed with exploring the human world since. Delba’s vision is that the Fomorians will be able to show the humans that they’re not monsters, and will one day find a happier life on the surface in coexistence.

As a Fomorian, Delba is enormous, and most people on the surface find her scary, an opinion she finds hilarious. Delba’s tough and violent when she needs to be, but she’d much rather be playing music and telling dirty jokes with her friends.

Optimistic to a fault, Delba wants the Fomorians to stop living in the shadows and to lead them  in a triumphant return to the surface. She hopes to inspire others to be more accepting of her kind, and will often neglect her own needs in order to make people like her. Everything is Fomorian first for Delba– and when it comes to conflicts she doesn’t care as much about morality as she does about practicality and pushing her own cause.

A Greek mercenary in his early twenties, Heraklios loves glory more than anything else in the world. He insists, nearly to the point of obsession, that every fight be as fair as possible. He will sometimes make situations substantially harder on himself just so that he can live up to that sense of fairness. As well, Heraklios tries to stand up against injustice anywhere he sees it, but this can get him into trouble when he intervenes where he isn’t wanted.

Outside of combat situations, Heraklios is a little awkward, but sweet and full of bravado. He’s very traditionally masculine in a number of ways– including his love of beer, a good laugh, and bad jokes. He has an encyclopedic knowledge of Greek legends and myths, and will recount them loudly, and with many embellishments to anyone who asks. Or doesn’t.

Heraklios struggles with impostor syndrome. Despite being unbelievably skilled, he never feels like he is enough– that all of his accomplishments have been lucky breaks, and his failures have been deserved. Heraklios’s biggest dream is to earn glory, worthy of love and go down in history as a hero, and above all else — to feel like he really, truly deserved it.

The eldest daughter of a noble family in Meroe, in The Kingdom of Kush, she was sent to Egypt as a young teenager and educated in the best schools Alexandria could offer. Khaldun can read, write, and speak nearly a dozen languages, and can speak at length about the vast pantheons of Nubian & Egyptian gods and goddesses without checking reference materials.

Proud of her heritage, Khaldun prefers to wear clothing styles that reflect her Egyptian culture. She relocated to Brigantia with Queen Escota and Prince Lugaid five years ago and these costumes and styles still seem foreign and overly elegant to her Celtic peers.

Khaldun’s necromantic powers come from her unwavering faith in the Egyptian pantheon and her devotion as a priestess to the god Osiris. This occasionally put her in conflict with some of the more devout Celtic worshipers she encounters.

Mal is a mid thirties, tough-as-nails rogue who loves violence for the sake of violence. Luckily, she has channeled this love into a career killing dangerous monsters. She doesn’t talk much, would rather be caught dead than in a dress, and perversely enjoys smelling a little bit like death to keep people from talking to her. If you don’t seem dangerous or interesting, she won’t give you the time of day. The only time she’s seen smiling is when she’s killing something.

Those who get close to Mal notice two things: her knives and her golden eye. The story goes that years ago she lost an eye in a fight with a monster and her husband at the time, a Mourian man, saved her life by pouring magic imbued gold in her empty eye socket. Now, if she places the eye of a deceased creature or person in that socket, she can see how that individual died. This moment of death comes not just from the deceased’s eyes, but also their feelings at their time of death, which distort the vision. A murder victim may perscieve their killer as more horrifying or monstrous than they are in real life.

The werewolf curse of Rea’s clan has intensified over time, with each new generation becoming more lupine than the last. Rea was the first werewolf to be born without speech. Though she walks on all fours, she is more intelligent and empathetic than most humans. Rea thinks deeply about every action, and chooses her moves and howls carefully. She believes that it’s in everyone’s best interest to work together and strive towards a better future.

Do not confuse Rea for a dog. Where pet dogs are loyal out of pure love for their masters, Rea’s loyalty stems from her need to prove she is just as human as everyone else. A difficult task when you’re essentially nonverbal. Not being able to talk when you can think in complex sentences is frustrating, and sometimes she lashes out.

Rea has a different perspective on the corruption plaguing the land than the rest of your party. She hopes that those being corrupted beyond recognition might one day be cured, and that whatever magic brings about that cure might finally help teach her how to communicate with others the way she’s always dreamed about. In the meantime, she’ll continue practicing trying to wrap her tongue around words while standing on her hind legs.

Nearing fifty, Brigg is your oldest non-immortal party member in the game. Until a few years ago, they had been a commander in King Ith’s army until they retired in order to allow their young protegeé, Tiana, to take her place. Brigg supports Tiana completely from their new role as an advisor.

Brigg was born in a tiny village far outside of Brigantia, but ran away to join the military when they were a teenager. They’ve been fighting longer than many of your companions have been alive. They’re incredibly optimistic, and will try to do the right thing whenever possible.

Despite their age and scars from numerous battles, Brigg has remained feminine in a very girlish, innocent way. They’re a tomboy for sure… all swords, punches, and bloodshed… but at the end of a hard day of brutal training they’ll make flower crowns for the younger warriors to help them relax.

Brigg’s introversion can sometimes get in their way, as people don’t expect it from such a physically tough, commanding person, but they’re deeply private about their true thoughts and feelings. Brigg rarely engages in conversations that go below surface level.

Trasté is from Aunes, a coastal city. Many trasnos there. Many fun jokes and much music!!

Youngest of the trasnos, but who knows what that means in your years. Trasnos do not care about time. Time is fake, probably. Unless they’re waiting for a person to… hehe… come across one of their pranks!!

You changed from one thing into another thing. Maybe you can make Trasté a people?? Worth a try!!!

Come chat and join in on the fun at: https://ift.tt/3dPmOzO

@project_warlock It was revealed... now give us the preorder page!