Play ALL of Funcom’s Conan games free on Steam this weekend! 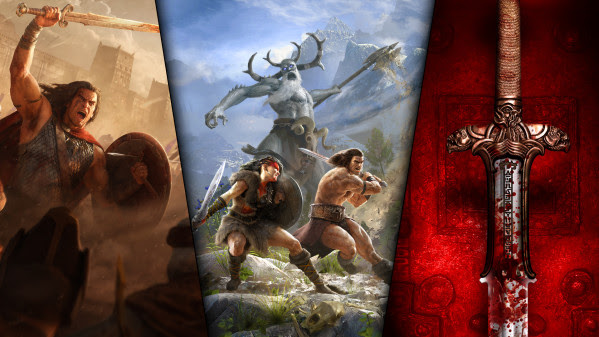 Play ALL of Funcom’s Conan games free on Steam this weekend!

Funcom’s best-selling game ever, Conan Exiles, the brutal MMO Age of Conan and a newly improved and expanded Conan Unconquered are all available for free this weekend starting TODAY.

OSLO, Norway – Sept 19th, 2019 – In celebration of the Conan franchise and in order to display the evolution of all three titles, Funcom has together with Steam today made survival game Conan Exiles, MMO Age of Conan and the RTS game Conan Unconquered available to play for free for a limited time.

Starting today and lasting until September 23rd, anyone can log on to Steam to play the three Conan games and discover the improvements they have had since their initial launches, as outlined below. During this time, and lasting for an additional week, all three games will also be available for purchase with significant discounts.

The open world survival game, set in the savage lands of Conan the Barbarian, quickly became one of Funcom’s best-selling games after a successful Early Access run starting January 2017. Since the game launched in full on PC, Xbox One and PlayStation 4 on May 8 th, 2018, the game has had 7 DLCs and a host of free updates, adding new lands to explore, more end-game content, building pieces, bug fixes and performance improvements.

For a limited time, the game will be available at a 50% discount on Steam.

The MMO, which is widely considered to be one of the most brutal games in the genre, sold more than a million copies within weeks after launch. Age of Conan has benefited from years of continual development, improving the visuals, performance and content of the game.

The MMO was re-worked into Age of Conan: Unchained in 2011, making it available free, with the option of purchasing additional content. During the Steam Free Weekend, Hyborian Conqueror Collection – containing 4 expansions and an exclusive vanity item – will be available at a 60% discounted price.

The real-time survival strategy game developed by the Command & Conquer-veterans at Petroglyph and published by Funcom was released earlier this year. This week the game has been updated, improving the game’s visuals and balancing, as well as adding a new playable hero – Bêlit the Pirate Queen – and new campaign scenarios. The price has been adjusted from $29.99 / €29.99 to $19.99 / €19.99 (prices may differ across territories) and will even be available at a 30% discount through the course of the week.

Funcom is an independent developer and publisher of online games for PC and consoles. Funcom has provided outstanding entertainment since 1993 and continues to expand its track-record of more than twenty released games. Titles include ‘Conan Exiles‘, ‘Secret World Legends, ‘Age of Conan: Hyborian Adventures’, ‘The Longest Journey’, ‘Anarchy Online’, ‘The Park’, and ‘Dreamfall: The Longest Journey’.

Based in Las Vegas, Petroglyph has roughly 30 employees with many team members coming from Westwood Studios, creators of Command & Conquer. They’ve been responsible for a range of tactical and strategic PC games including Star Wars: Empire at War, Grey Goo and the recent ‘8-Bit’ RTS series. They are also currently developing the remaster of Command & Conquer to be released by Electronic Arts.

PrevBackCyberpunk dungeon-crawler, Conglomerate 451, Gets a Massive Update in Anticipation of its Upcoming Full Launch!
NextPhilosophical Puzzler ‘The Sojourn’ is out today!Next
Back to Home Page