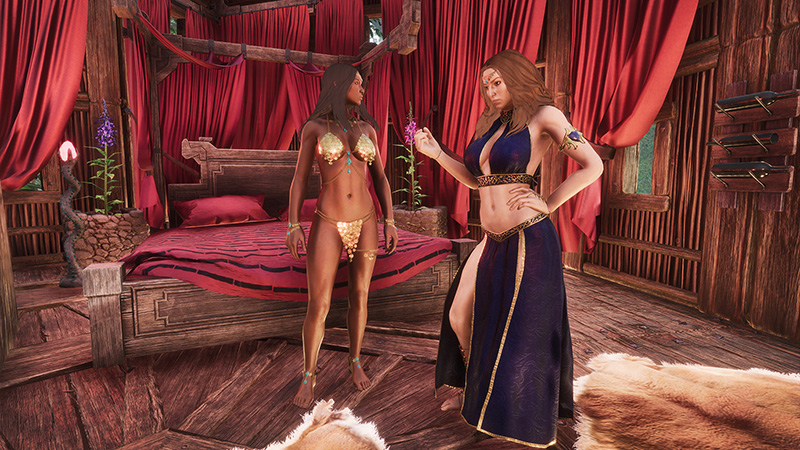 Things are about to get steamy in The Exiled Lands. The Debaucheries of Derketo DLC offers a host of new items and emotes, with lust and overindulgence as the common denominators.

Give in to temptation: Funcom today released a new DLC for Conan Exiles, as well as a free update containing a new end-game dungeon. An ancient Wine Cellar was recently unearthed by the Relic Hunters, but in their greed they may have disturbed something best left alone.

OSLO, Norway – Oct 8th, 2019 – Build a luxurious pleasure house in the tree-tops, connected to a bustling tavern by a rope bridge. Decorate your home with an exquisitely crafted chess set, scarlet curtains and wine racks, and prepare yourself for battle with the new and intimidating Dark Templar armor set. The Debaucheries of Derketo DLC lets you throw your prudence aside and give in to your darkest and innermost desires.

Released today on PC, Xbox One and PlayStation 4, Debaucheries of Derketo offers Conan Exiles players a wide variety of new building pieces, outfits and emotes. Also released is a free update, giving everyone access to the brand-new Wine Cellar dungeon, where you will find the new Khari Warrior and Khari Priest armor sets.

Debaucheries of Derketo pack is available for $9.99/€9.99 (pricing may differ across territories), and contains the following:

All the new content in Debaucheries of Derketois exclusive to this DLC and adds a host of new visual options, but does not give any in-game advantage in power. All the new items have comparable stats to existing items.

Conan Exiles is an open world survival game set in the savage lands of Conan the Barbarian. After a successful Early Access run starting in January 2017, the game launched in full on PC, Xbox One, and PlayStation 4 on May 8th, 2018 and became one of Funcom’s best-selling and fastest-selling games to date.