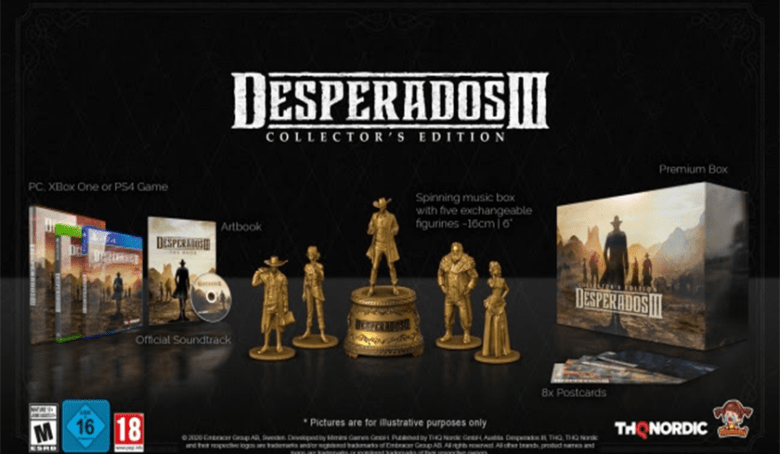 Catch ’em All: Desperados III is Getting a 5-Figurine Collector’s Edition With Music Box and Season Pass

Vienna, Austria/ Munich, Germany, April 14th, 2020: This is the sound of the CE: Check out the new Desperados III Collector’s Edition trailer and listen to the music box unfolding its magnificent magic. The Collector’s Edition comes with 5 figurines of the five fabulous Desperados, John Cooper, Kate O’Hara, Doc McCoy, Isabelle Moreau and Hector Mendoza. Additionally, the Collector’s Edition will come with the Desperados III season pass including 3 DLCs, each featuring a brand new mission. These DLCs will be released post-launch in 2020 and tell the story of a new adventure that takes place after the events of the main game.

You can start collecting your real-time tactical memories with Desperados III on your PC, your PlayStation®4 or your Xbox One™ in Summer 2020.

Still no release date? Please stay tuned, we will announce it very soon – we just want to be sure to give you a final date!

Desperados III is a story-driven, hardcore tactical stealth game, set in a ruthless Wild West scenario. In this long-awaited prequel to the beloved classic Desperados: Wanted Dead or Alive, John Cooper will join forces with the runaway bride Kate, the shady hitman Doc McCoy, the giant trapper Hector, and Isabelle, a mysterious lady from New Orleans. On Cooper’s quest for redemption, his adventures lead him and his gang from rural towns, over swamps and riverbanks, and finally to a dramatic showdown worthy of Wild West legends.

Play smart if you want to succeed. A good plan can make the difference between survival and finding yourself at the business end of a pistol. Combine your team’s special skills to overcome each tough challenge in your own style.