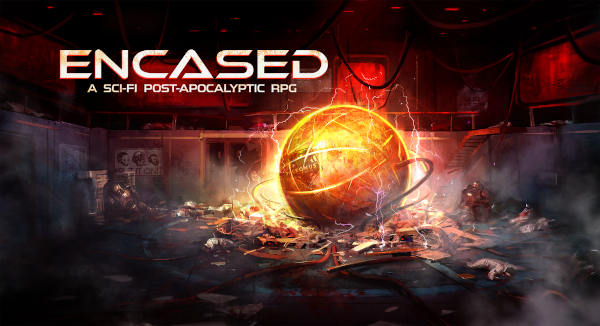 Saint-Petersburg, Russia, 17 September 2019 – Encased from Dark Crystal Games is now available in Early Access. Encased is an isometric role-playing game set in a sci-fi post-apocalyptic world. During the Early Access developers will focus their attention on the story and non-linear narration.

The game was successfully funded on Kickstarter in September of 2018, and is currently one of the top 50 wishlisted games on Steam! The Early Access price will be $30.

At the start of Early Access, players will be able to complete the prologue and first act of the game. You will play as an employee of the CRONUS Foundation, recruited to live in and study the anomalous zone known as the Dome. During an expedition, the player triggers a mysterious incident that leads to a cycle of events that will forever change the world under the Dome. The initial Early Access release will feature 10+ hours of gameplay. In addition to the main quest, players will have the option to pursue several side-quests, develop skills and character attributes, participate in multiple turn-based battles, and explore some of the open world and CRONUS fortifications.

The full release is planned for 2020. During Early Access, developers will be releasing regular updates to significantly increase the amount of available content, locations and quests.

Dark Crystal Games studio paid a lot of attention to working with the community during the development. Future players had an opportunity to fill in interactive questionnaires that filled the game with additional NPCs, quests and stories. By filling in the special questionnaire, the community could offer its own weapons: from baseball bats with nails to monstrous flamethrowers. Social media followers could share their own ideas for the plot and setting of the game, many of which will be included in the final version of the project.

Encased is an isometric role-playing game set in a sci-fi, post-apocalyptic setting. The game takes place in an open world consisting of more than 200 locations, with over 100 side-quests and 75 random events. During the main story, featuring 30+ hours of gameplay, players can choose to join one of the five main factions or remain neutral. The player’s every action, decision and criminal act will affect our hero’s reputation and the development of the plot.

The story begins in the 1970s and revolves around the study of the Dome, a giant anomaly of unknown origin, discovered in an uncharted desert. The multinational CRONUS Foundation is responsible for the ongoing colonization and study of the anomaly. CRONUS was founded by the world’s leading governments and earns huge sums of money from the sale of artifacts found under the Dome, and the patents derived therefrom. The game begins with an expedition to a scientific complex near the center of the Dome, before the disaster triggering the apocalypse. The task looks like child’s play at first, but soon everything goes very, very wrong.

PrevBackIT ARRIVES! Lovecraftian horror CRPG, Stygian: Reign of the Old Ones, launches on Steam!
NextFuncom Announces Mounts Are Riding to Conan Exiles!Next
Back to Home Page