Monkey King Hero is Back 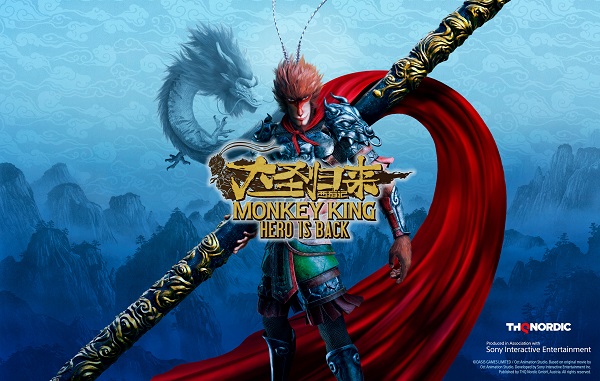 THQ Nordic, Produced in Association with Sony Interactive Entertainment (SIE) and Oasis Games Limited today announced that it is releasing the game “Monkey King: Hero is Back” as well as the special “Hero Edition” version of the game for PC and PlayStation®4 (PS4™) on October 17, 2019. Players can pre-order the game from PlayStation™Store (PS Store).

For PC, THQ Nordic will be distributing the physical Standard Edition, with digital preorder starting on August 19 2019.

On PS4, THQ Nordic will be distributing the digital and physical Standard Edition, as well as the the digital version of the Hero Edition, with digital preorders starting today, on August 14 2019.

“Monkey King: Hero is Back” Overview

The game is based on the thrilling Chinese action fantasy movie “Monkey King: Hero is Back” that was released in theaters in 2015 and tells the story of a young boy named Liuer and his adventures with the Monkey King, Sun Wukong, who is released after having been imprisoned for 500 years. Known by movie fans worldwide as one of the premier examples of Chinese animation, the movie went on to set a box office record for animated movies in China at the time, grossing more than 160 million EUR upon its release.

With “Monkey King: Hero is Back” for PlayStation®4, Sony Interactive Entertainment has teamed up with Oct Animation Studio, the studio behind the movie’s breathtaking visuals, to create a game faithful to the look and feel of the movie.

Like the movie, this action-adventure game tells the story of the young monk Liuer meeting his hero Sun Wukong, but places the focus on the Monkey King himself while also introducing players to various stories and subplots not found in the movie. Together, Sun Wukong, Liuer, and Pigsy embark on a journey of adventure, while deepening the bonds of friendship between them. Players assume the role of Sun Wukong and use his mystical skills and abilities to defeat the assorted foes before them. The game immerses players in the middle of their own tale of adventure, while also enabling them to experience the rich and deep story the beloved movie is known for.

The “Monkey King: Hero is Back” Hero Edition features the main game plus the season pass, consisting of two additional stories available as DLC (“Uproar in Heaven” and “Mind Palace”), 2 in-game costumes for the protagonist (Tuxedo and the Dasheng Doll), as well as special items that can be utilized within the game.

The preorders for both editions on PS4 will begin on August 14 2019. Additionally, the PS4 versions will feature a special bonus for those who pre-order the game: two exclusive game modes (“Paradise” and “Desperation”), and a PS4 theme.

PrevBackFriday the 13th: The Game – Ultimate Slasher Edition out now!
NextShare in Vigor’s Free Weekend Success and Check Bohemia Interactive Out at Gamescom!Next
Back to Home Page