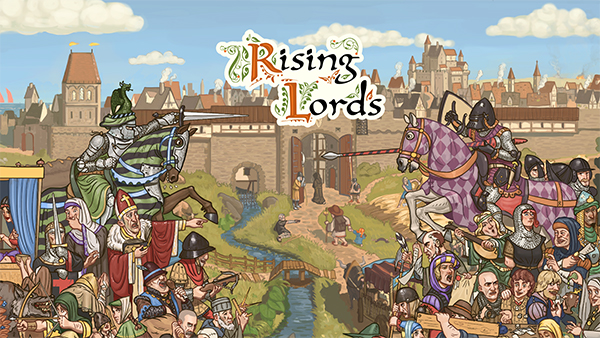 Cologne, Germany — May 13, 2020 — German game development studio Argonwood has revealed its tactical medieval strategy game Rising Lords will be available for Early Access on PC via Steam on May, 27th 2020.

Rising Lords puts gaming minds to the test through turn-based elements that implement card and board game-based mechanics with classic action sequences.

As a lord or lady in the medieval realm, players are given full control to rise their territories and lead serf armies. Players are allowed to collect taxes and resources from their constituents, dictate food rations and field work for their workers, forge weapons for war, reshape the battlefield, raise armies, and build mighty fortified cities. With free will decision-making mechanics, players can give their people knighthood or dump them on a battlefield far away. Though be warned, even the most humble peasants can revolt.

“We have a blend of the most prolific aspects of strategy games, digital board games, and deck-based card games to create incredibly deep gameplay for our players,” said Chris Fernholz, founder of Argonwood. “With a dedicated single player campaign and robust multiplayer functionality, Rising Lords brings a modern approach to some of the all-time classic strategy games.”

Rising Lords’ multiplayer aspects include various modes for quick games when players want something short or long evening types of games where they can reach deep parts of the game to the peaks of the night. With simultaneous gameplay capabilities, up to four players can make their move at once while engaging in a time of feudal nobility.