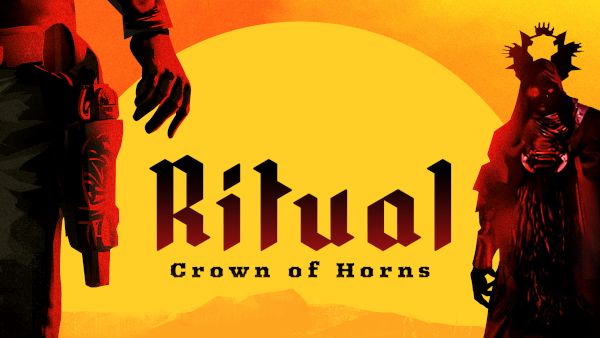 Ritual: Crown of Horns rises from its grave on November 7th

Pack your hands full of iron and hellfire and set out on a journey to defend the west.

Krakow, Poland – October 31st – Feardemic Games are proud to announce that after a successful round of autopsy and embalming in the Early Access morgue, Ritual: Crown of Horns is rising from its grave on November 7th 2019.

Thanks to the feedback and testing done by those who picked up the game early, Ritual has been honed to a mirror sheen, with its challenging and thoughtful wildly weird western action ready to put players to the test. Stand your ground and defend the witch who holds the leash to your mortal coil as she conducts rituals all across a 19th century United States, all to subvert and defeat a shadowy cabal that has taken control of the country and put you in the ground in the first place.

About Ritual: Crown of Horns

Ritual: Crown of Horns is a slaughterhouse: a fast-paced action game set in an alternate Wild West, a demonic version of a hellish frontier. This arcade-inspired title unravels a tale about an unlikely duo: a bounty hunter who comes back from beyond the grave, yearning to exact revenge on his killers and a witch who aids him with a series of powerful rituals to further her own agenda.

Push back hordes of enemies, while the witch performs her ritual. Work a varied arsenal of firearms to your advantage: mindfully swapping between weapons and spells. Unlock new tools and powerful items which boost your gunslingers stats and changes their look. Travel throughout the Weird West picking your missions and planning future unlocks to finally exact your revenge!

Ritual: Crown of Horns is a skill based game, where split-second decisions and planning on the go are more powerful than button mashing and throwing yourself mindlessly at enemies.

Don’t Die, Minerva! Debuts on PC and Xbox One This December