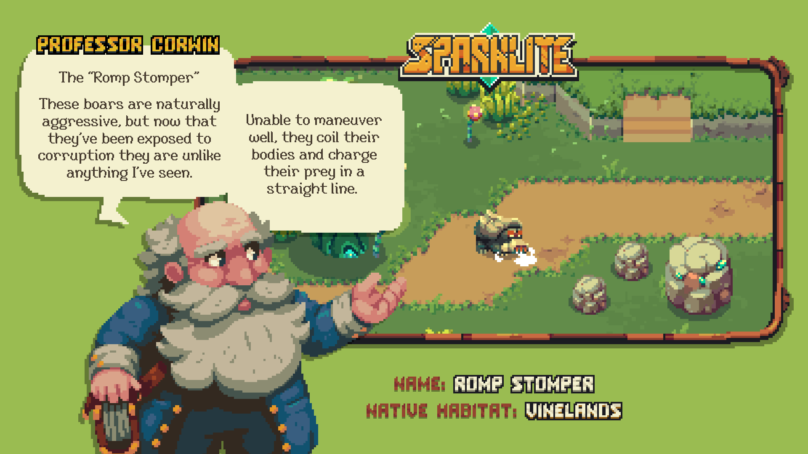 Geodia’s most dangerous beasties are not to be trifled with. Get a competitive advantage with Professor Corwin’s help!

Manchester, UK, July 16th, 2019 — We all need a little help now and then. Luckily, adventurers ready to tackle the perils of Sparklite can get a leg up on their foes thanks to Professor Corwin’s Bestiary of Brutal Baddies of Geodia! Sparklite, the colorful action-adventure from Red Blue Games and Merge Games, will be coming to PC, Nintendo Switch, PlayStation 4, and Xbox One this October. We want to give players an early heads-up on a few of the cantankerous critters they’ll encounter on their journey!

As you gear up to face off with all the creepy crawlies Sparklite has to offer, make sure to add the game to your Steam Wishlist! Join the official Merge Games Discord and let them know which of these monsters you think is the most dangerous and you could win 1 of 5 Steam keys when the game arrives later this year! Finally, be sure to check out Red Blue Games over on Twitter for a fun surprise starting today!

Geodia is home to many docile and beautiful animals, however, not all is well in this usually-peaceful land! The power-hungry Baron’s nefarious mining activities have altered and polluted Geodia’s once-majestic Biomes. The animals residing in these areas have been affected too; transforming into mutated and aggressive creatures. Continued mining is causing Geodia’s landscape to shift, changing its layout with each Fracture and further affecting the creatures. Our hero, Ada, has undertaken a great and difficult cause; put a stop to the Baron, his Titans, and their pollutive mining, and reverse the effects they’ve had on Geodia and its inhabitants.

To aid you, Professor Corwin, Geodia’s foremost expert on Geodian wildlife, was kind enough to catalogue some of the mutated creatures you’ll encounter as you journey through the Biomes in Geodia. Needless to say, this should help you and Ada on your quest!

Sparklite is an action-adventure set in a whimsical and ever-changing land. Battle foes in top-down action using an arsenal of gadgets, guns, and gear. Explore dangerous corners of the procedurally generated world, take down titans of the mining industry, and harness the power of Sparklite!

Tetsumo Party is coming to Switch, PS4, Xbox One and PC on 26th of July!