The Invasion has begun: Destroy All Humans! today, it’s out now! 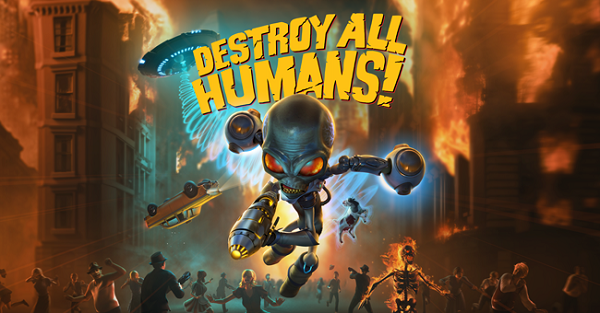 Vienna/Austria, Offenburg/Germany, July 28th, 2020: Puny Humans, rejoice! The day has finally arrived, today Destroy All Humans! is available on PlayStation®4, Xbox One™, and PC. These devices will allow you to witness the glory of the Furon Empire in your living room, no need to bring your resistance to the outside world!

Get ready to be annihilated! Cryptosporidium-137 arrives on your platform of choice at these times:

In his new video series, Cryptosporidium-137 is delighted to show off his fine arsenal for the extermination of mankind. Starting with the “Disintegration Ray”, you will find a new weapon showcased every week on THQ Nordic’s YouTube-Channel: http://n.thq.com/atya30qYyxB

Crypto’s adventures leading him to some interesting fictional places in the United States of the flaming 50s. In the new “welcome to” series, THQ Nordic will present the famous locations one by one, from the Turnipseed Farm and Santa Modesta to Area 42 and Capitol City. All “welcome to” videos are available on THQ Nordic’s YouTube-Channel:http://n.thq.com/2VMF30qYyxH

We know, most of you humanoids can’t wait to witness the glory of the Furon Empire, so here’s your chance to play the Destroy All Humans! Demo for PC today, you can download it via Steam or Gog.com: